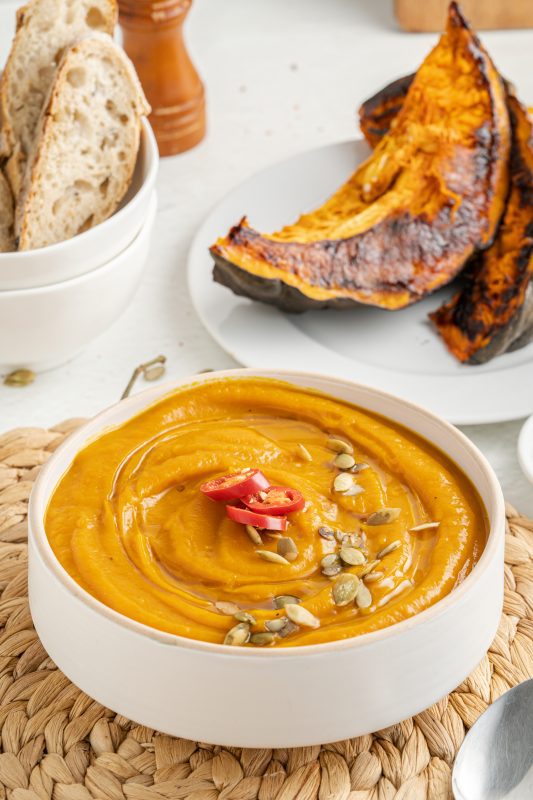 This Roasted Pumpkin Soup recipe is Vegan, Keto, and Gluten Free. It has an easy method for roasting pumpkins and then blending them with fresh herbs, veggies, pumpkin seeds, ginger, and a dash of cayenne to make the perfect fall soup.

My Roasted Pumpkin Soup recipe has the easiest method to take sugar pumpkins and turn them into a creamy and spicy soup. Simply, carve them, harvest the seeds, roast them and blend in a few herbs and spices!

Roasting pumpkin in the oven is the best way to get the full flavor from pumpkins. Plus making a soup completely from scratch is also the healthiest way because you have total control over the ingredients.

For a few great pairings, check out our Family Style Grilled Cheese, Sweet Southern Cornbread. If you like fresh from the garden soup, you can also look up our favorite Fresh Tomato Soup.

Why you will love Spicy Pumpkin Soup

How to Roast a Pumpkin

Preheat your oven to 400 degrees and cover a baking sheet with parchment paper or tin foil.

Halve and deseed the pumpkin. Sugar pumpkins are small enough that they are easy to cut in half. At this point, scoop out the seeds and set aside for later. Next, slather the flesh of the pumpkin in olive oil. Add salt and pepper and a sprinkle of garlic powder or salt.

Roast. Place the pumpkin halves face down on the baking sheet. Roast them in the oven for roughly thirty-forty minutes. To test if they are done, a fork should easily go through the flesh and peel it backwards.

How to make the perfect Roasted Pumpkin Soup

What are Sugar Pumpkins?

Sugar pumpkins are the most commonly used pumpkin for baking. Compared to field pumpkins, sugar pumpkins have a softer, sweeter, and less stringy flesh that makes them ideal to use in recipes. They are part of the squash family and when used in soups can be traded out for butternut squash because the texture and flavors are similar. However, sugar pumpkins are most often used in baking which would include pumpkin pie, pumpkin cookies, and pumpkin breads.

Is Pumpkin Soup healthy for you?

Like other squashes, the calories of one cup of pumpkin are low (49), while the vitamin content is high. Pumpkins are especially high in beta-carotene which turns into vitamin A. One cup will equal 245% RDI. They also contain vitamin C, Potassium, B2 and iron. Pumpkins also contain antioxidants that neutralize free radicals in your cells and keep them healthy. Pumpkin soup is a great way to capitalize on all of the health benefits you can receive from eating pumpkins. 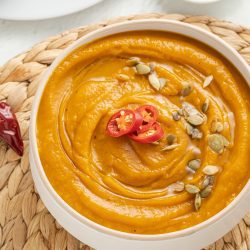 This Roasted Pumpkin Soup recipe is Vegan, Keto, and Gluten Free. It has an easy method for roasting pumpkins and then blending them with fresh herbs, veggies, pumpkin seeds, ginger, and a dash of cayenne to make the perfect fall soup.