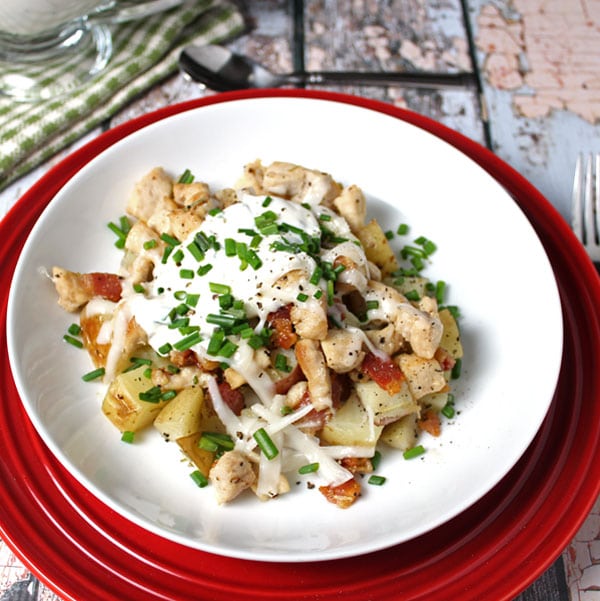 This Unstuffed Baked Potato is such a delicious, fun diner. Born from a cooking screw up by yours truly, but now it is a dinner we eat as often as possible!

Like many of you, Pinterest is my frien-emy. It is the most fascinating place of ideas and inspiration. It is sort of like your best friend from high school – it convinces you that you can do anything regardless of what people say. I often get sucked into the time warp that is Pinterest only to look up and discover that my planned day of productivity has been sucked dry by pinning lovely pictures of other peoples creations, dream vacations, and crafts. Every once in a while, I also buy craft supplies that end up in the closet to taunt me and try recipes that totally bomb. Stupid Pinterest. 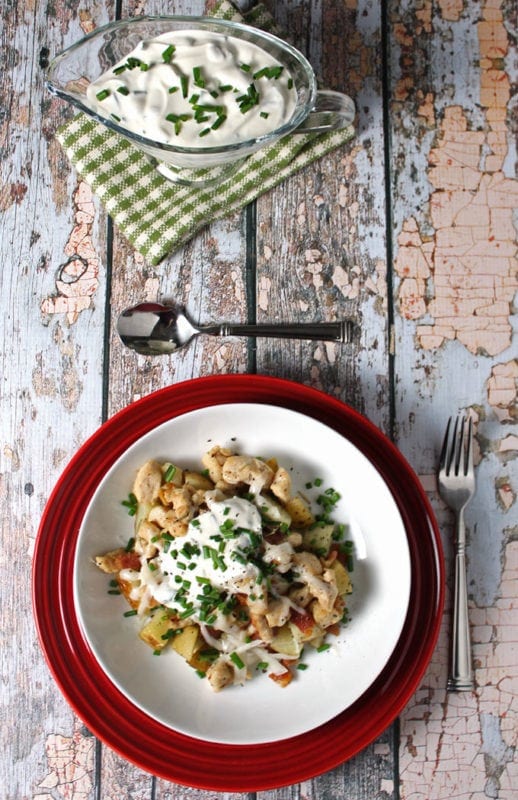 Such is the humble beginnings of the Unstuffed Baked Potato. A casserole showed up in my Pinterest feed that took the best of a stuffed baked potato and baked it all together with love and goodness. Yep, I can do that. Except…

The problem with cooking potatoes and chicken together in one dish is that roasted potatoes cook at a higher temperature than baked chicken. And potatoes take a lot longer to cook than diced chicken. And depending on your chicken, it can release a lot of water during cooking. Don’t ask me why this didn’t occur to me before I put all these ingredients in one dish and into the oven. I totally blame Pinterest for making me think it would work. So by the time the potatoes were done, the chicken was overcooked and the creamy sauce that was supposed to occur was just a big watery mess. (Yes, my family ate this anyway. They are good like that. And by now, they are accustomed to experiments in the kitchen.)

Not one to be conquered, and feeling a little like I needed to redeem myself since I cook a bit and should have known better, The Unstuffed Baked Potato born. Less like a casserole and more like a hash – because I love those (they are an awesome way to use up leftovers or stretch a meal) – I must say, it is pretty fantastic. My poor teenage daughter had so much homework that she ate dinner at her desk on the night I made this. By the time she came back for seconds, we had scrapped the bowls clean and were fishing around trying to pull any stuck bits off the cooking pans in the kitchen. She was not happy with us. But ever the trooper, made a salad and used the sour cream and chive sauce as a dressing. (Yep, it is that good.)

Check out the other hash-styled recipes like Pulled Pork Hash, Ham and Egg Hash, and from the gluten-free experiment Shrimp and Potato Hash. All of which, you can find on Pinterest. 🙂 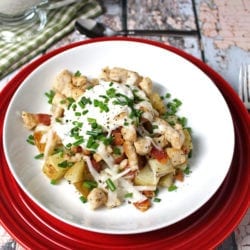