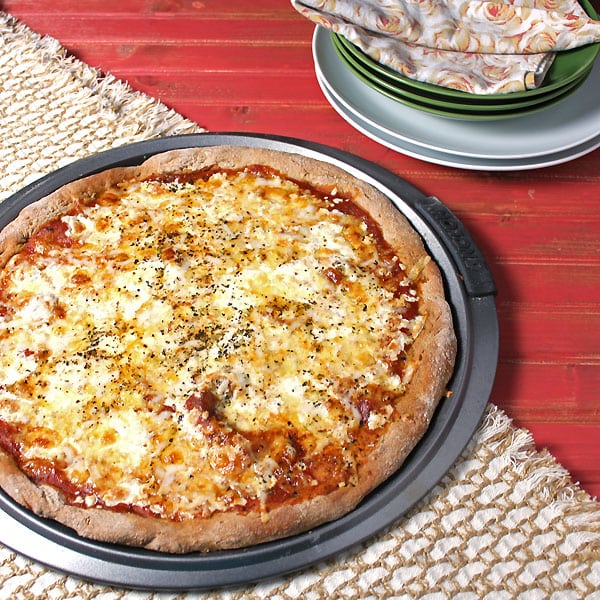 We love pizza. And by love, I mean LOVE! But after moving away from refined ingredients, pizza we ate at restaurants was a little like playing roulette. The odds were just not in our favor. You can read more about our pizza challenges in this post for Simple Pizza Sauce from Whole Tomatoes or in this post for Three Cheese Pizza. But we desperately needed pizza crust (and sauce!) that did not have all of the refined ingredients and chemicals – pizza night was in serious jeopardy.

I really struggled to find a whole wheat pizza crust that fit my needs. We are pizza pros – I needed crust that would be crisp on the outside and soft and chewy on the inside. I also needed it to be low on the fuss factor. Any recipe that I have to babysit automatically moves into the occasional category, not the weekly category. And with two toddlers in the house, I was not going to be standing around kneading dough. (Though you could easily do that with this recipe if you don’t have a stand mixer.) And it needed to refrigerate and freeze well so I could make and freeze more than one meal at a time.

This recipe does all that and more. It is so delicious – and I can easily just set my oven timer and walk away while it rises and kneads in the mixer. It is also very flexible. We use it on pizza pans for traditional pizza, in a cast iron skillet for deep dish, and even make grilled pizza with it.

If you are nervous about baking with yeast (I find it terrifying), the only real trick is in the water temperature at the very beginning. It should be about 110 degrees. That feels warm but not hot. The first time I made this dough, I used my oven thermometer to measure the temperature. Since then, I know how warm the water should be by touch and have not had any issues with the crust rising.

Go check out our favorite Three Cheese Pizza! Or if you are looking for something a little less “pizza shop” go check out our guest post at Cooking Chat – Skillet Pie with Mushrooms and Caramelized Onions uses this crust. You’ll never go out for pizza again! 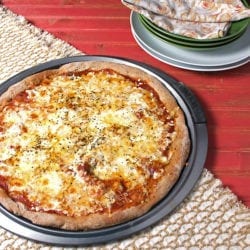