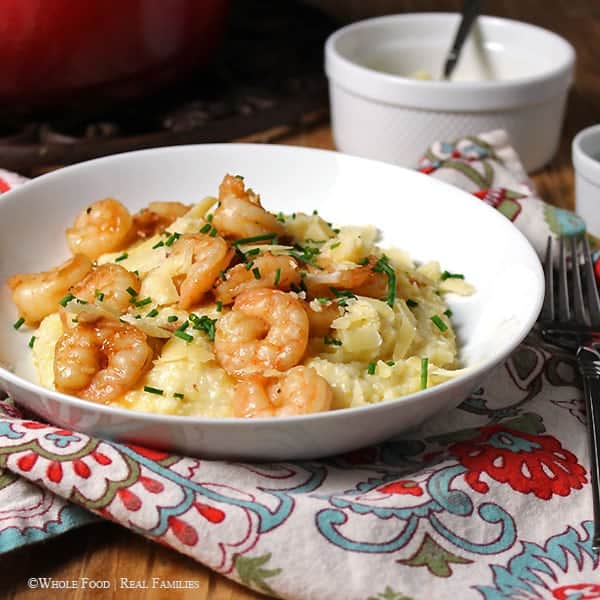 Lowcountry Shrimp and Grits is my simple recipe for a dinnertime classic. Rather than lots of fussy methods, we rely on fresh shrimp and a little spice with stone-ground grits. Then we serve it family style so everyone can build the plate they love.

I live in the Lowcountry. If you don’t know where that is – think coastal South Carolina and Georgia. It is called the Lowcountry because it sits around sea level. This means something very important for our cuisine… FRESH SHRIMP!

The marshland creates a fantastic habitat. (It is also a fantastic habitat for creatures that you might be less enthusiastic to cross paths with – Yikes!) So Shrimp and Grits is a thing here – and everyone makes them differently. This is my version. It has two very important elements: (a) it is not swimming in sauce. It has a nice pan sauce but it is not soup. (b) it is fast and easy enough to eat on a weeknight.

Shrimp and Grits from the Lowcountry 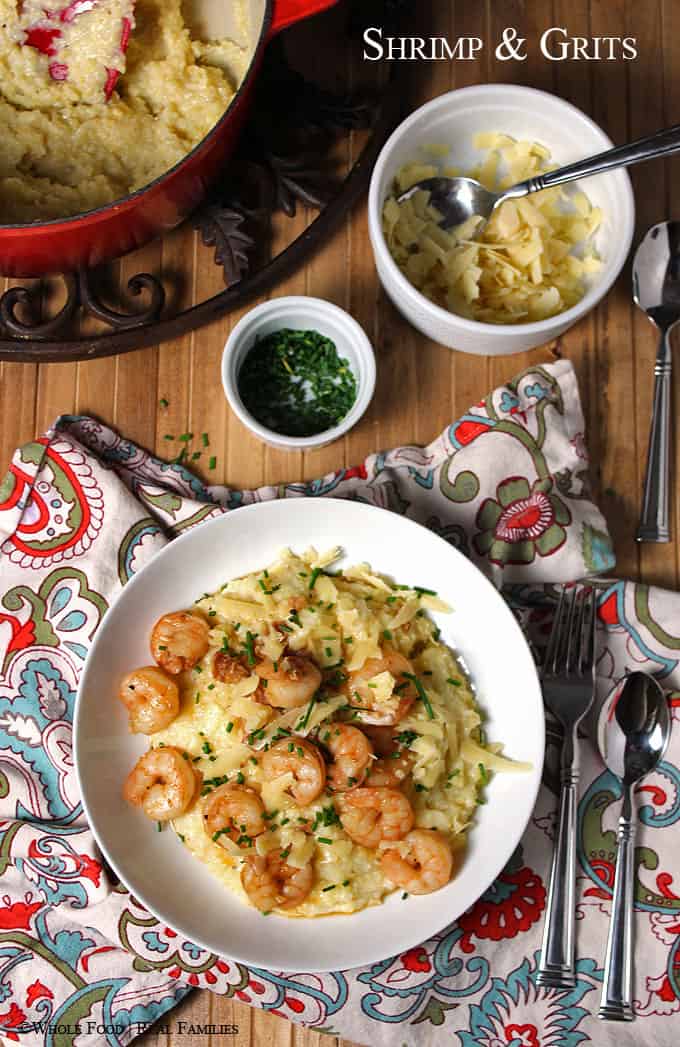 So get ready for Lowcountry Shrimp and Grits! They are a staple around here because we have such an abundance of fresh shrimp around. But even if you have to turn over rocks to find good shrimp, this easy recipe makes it worth it!

How to Make Shrimp and Grits

We have an ongoing dispute in our home about Shrimp and Grits. For the most part, everyone eats what I put on the table because they are pretty awesome that way. (The babies occasionally object but they are learning.) Everyone likes Shrimp and Grits a different way. It borders on ridiculous the things that we have come up with to argue about over this one dish. Some like them with cheesy grits, some no. Some like them with green onions, some no. Some of us (ahem, Jeff) change our minds every time we sit down to dinner. I solve that problem by serving Shrimp and Grits a la carte and letting everyone build what they like. It may not be traditional but anything you build yourself is kind of fun.

Speaking of kids, this recipe does have some spice. I have no idea why every single one of my kids will eat chipotle pepper – but they do. If I change it out for cayenne pepper or any other kind of chili powder, the little ones complain it is too hot. So we tend to eat a lot of chipotle pepper around here. If you are skeptical of spicy food it is worth seeking out a bottle of chipotle pepper and giving it a try. In my humble opinion, smoking the jalapenos brings out the sweetness in the peppers along with the heat – it is unique and flavorful without being over the top hot. (If you decide to try it and it is still too hot – I’m so sorry!!!)

The one thing everyone in my family can agree on is that you can’t eat those powdery grits out of the white bag from the grocery store when you are serving Shrimp and Grits (well, really not ever – but ESPECIALLY if you are serving Shrimp and Grits!) My husband is originally from Ohio, when he moved to Georgia, he had never even had grits. He thought they only served them at truck stop diners and fast food breakfast places. Boy did he get an education when he married a Georgia native. (You are welcome, honey!)

Get the good grits. The stoneground ones. Preferably organic. Preferably from a farmers’ market – or a farmer – on anyone who had a chance of seeing the grits as corn before they were ground into grits. This increases the likelihood that they have not sat on a shelf for 7 years. Good grits taste like – well, corn. They take longer to cook but are totally worth it. If you’re not from around here – forgive me, I had to say that – and you have historically questioned the validity of grits as a food choice, take my word for it. Good grits are miles away from the cheapo, powdery kind that you get at a truck stop diner. In fact, when I make this dish, I always double the grits and put half in the fridge. Everyone reheats them for breakfast the next day.

If you like shrimp and are looking for more healthy recipes, you’ll love Garlicky Pasta with Sauteed Shrimp and Chard, and Creole Style Gumbo . Enjoy! 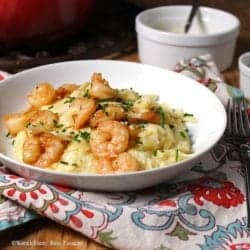