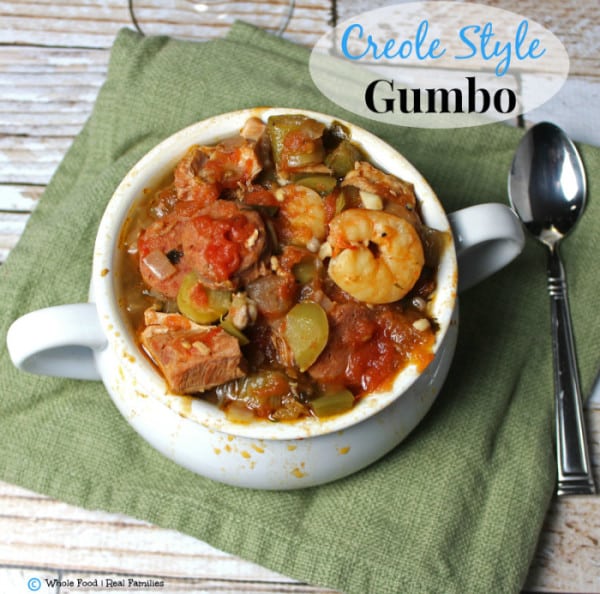 Cajun and Creole food has a reputation for being super spicy. While those of us with this heritage have been known to shake cayenne pepper or hot sauce on the simplest dishes – that is not always the case. Gumbo is a rich stew with as many variations in recipe as there are people who live in the state of Louisiana. And there are differences between Cajun and Creole styles. But Gumbo is rarely spicy, instead it is a rich stew made by layering the flavors of the proteins with Louisiana’s version of mirepoix – affectionately called the Holy Trinity by Cajun and Creole cooks everywhere – onions, green bell peppers, and celery.

As in most recipes on Whole Food | Real Families, we stay clear of refined ingredients and simplify where we can to make recipes more nutritious and easier to get on the table. Such is the case gumbo. Most gumbo uses roux to thicken the stew, I prefer to rely solely on the okra as a thickener. You know how okra gets all funky and gelatinous when it gets wet – that very funk is what good gumbo relies on to thicken the stew. (No worries, there is nothing gelatinous about the end result.) The word “gumbo” is actually derived from the West African word for okra so you can have a tasty stew but you can’t have gumbo without okra. I also roast my tomatoes before adding them to the stew to intensify their flavor.

Gumbo is always served over rice. And with a good hot sauce on the table for those of us who enjoy spicing things up! Here are our favorite supporting cast members – Herbed Brown Rice and Roasted Pepper Hot Sauce.

If you would like to see more Creole inspired recipes, check out Creole Chicken with Sauteed Kale – also on that post, learn the difference between Creole and Cajun! 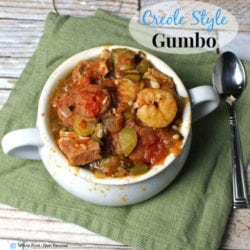