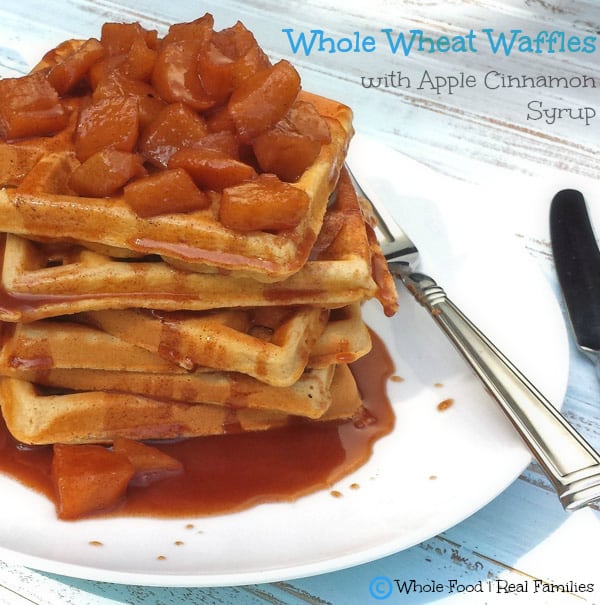 Whole Wheat Waffles with Apple Cinnamon Syrup is so tasty, you will never know they are actually (mostly) healthy. Okay, you are going to want to put lots of butter and syrup on them…. but they are whole wheat!

I am about to rock your whole wheat waffle world. You will never miss the processed flour or sugar in these whole wheat waffles. My family didn’t. When this recipe came together, I had to make 3 batches of waffles before I had enough to photograph. These are not small waffles. 3 batches is a lot of waffles. Seriously family? Do you have a hole in your leg where the waffles fell out? I am truly impressed.

Being a food blogger family, everyone is pretty accustomed to having their hands slapped away from the food until I can take the pictures. (Sometimes I win. Sometimes they win. I have lots of pictures with sneaky little hands to prove it.) On this particular weekend, my oldest daughter had been at an athletic event  and had not gotten home until very late. So around lunch, she appeared in our presence disheveled and groggy. The conversation went something like this:

Mom, can I make waffles?

Do you know how to make waffles?

Excuse me, do you live here? There hasn’t been a boxed mix for waffles in YEARS.

Are you asking me to make you waffles?

Ask me to make you waffles, rather than try coerce me into making waffles.

Mom, will  you make me waffles? I would really appreciate it. And I will help.

So I had help in the kitchen and it was fun. There were waffles… a LOT of waffles. I had this idealistic view of my day that I would make waffles, take pictures, let everyone eat and move on. Silly me. Every time I turned around to put waffles on the serving plate, it was empty. The lid kept disappearing off the apple cinnamon syrup before my apples were soft. All 3 kids and my husband had meandered into the kitchen and were snatching waffles every time I turned around. I actually caught my teenager folding over a waffle  in her hands like a taco and dipping the whole thing in the apple syrup while it was cooking on the stove. Hello child, I would like you to meet your fork. Apparently you have not been properly introduced. (I have discovered that her normal manners return after she gets through 1st breakfast and 1st dinner. She is much more polite for 2nd breakfast and 2nd dinner. She works out so aggressively that I can only think that this must be what it is like to have a 6-foot-4 teenage boy in the house.) I finally succumbed to the inevitable and just  cooked until everyone was full.

My teenage daughter had EIGHT waffles. As in 8. She sat back and rubbed her flat, itty-bitty, size-3 belly and said: Mom, I think I am full.

Angels sang, there was a bright light.  That is the first time I have heard that in at least 6 months. Thank you whole wheat waffles. You accomplished the impossible.