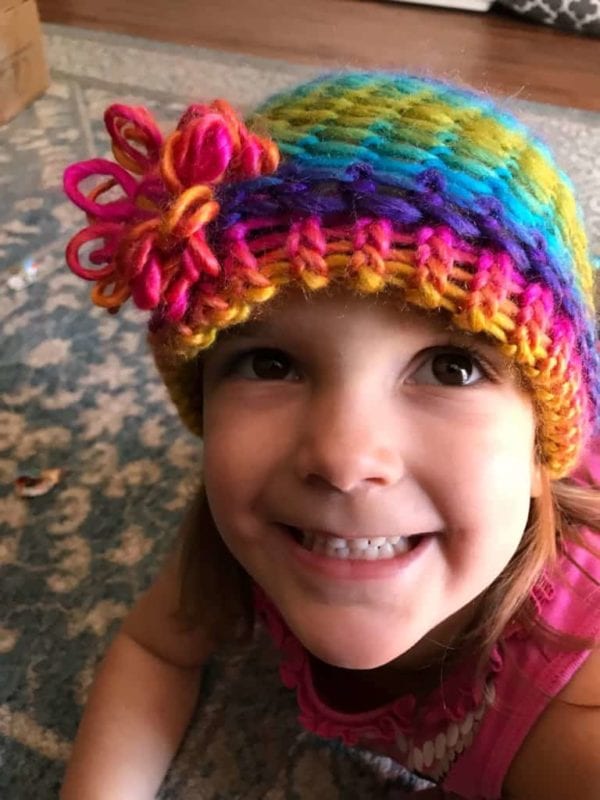 Make this Colorful Knit Hat with Flower for all of the colorful girls in your life. I love this simple loom knitting pattern so much that I know it by heart and make it when I want to knit but have no real project in mind.

This beginner pattern is a great place to start if you have never picked up a knitting loom but want to give it a try. It is also a great, simple pattern if you want to make a round of gifts for the girls in your life but aren’t sure if you have enough time for complicated work.

Quickly this momma learned that if I make one of anything, I am going to have to make several <— it is a side effect of having 3 daughters. This Colorful Knit Cap with cute little flower is super simple to make on a knitting loom. 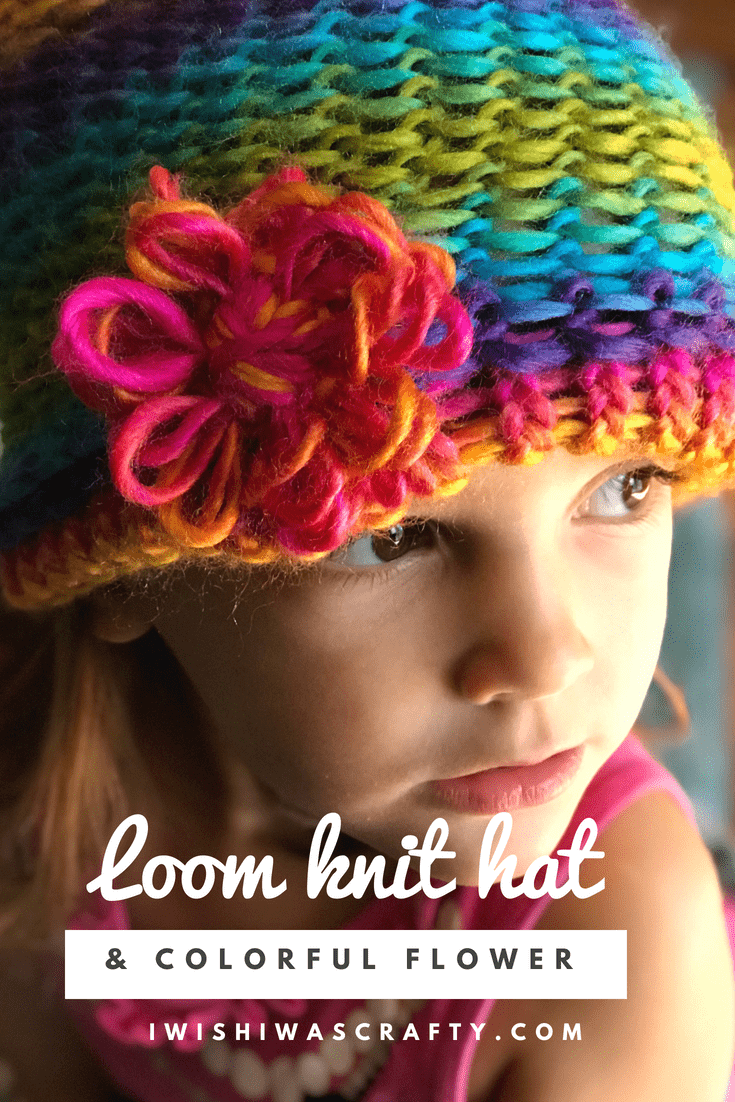 While I am pretty handy with a crochet hook, control over traditional  knitting needles escape me. I am a preschool level knitter, but I love the look of knit stitches. (Maybe one day I will actually master knitting!)

I didn’t even know Loom Knitting was a thing until a couple of years ago. And while there are plenty of complicated patterns to master if you get super jazzed about Loom Knitting later, there is a huge list of goodies you can make with really simple stitches and an inexpensive plastic loom.

I know the word “inexpensive” can be a little questionable… (what qualifies as inexpensive anyways?) You can purchase a set of round knitting looms, including 4 different sizes for about $25.

This set of looms will make everything from socks to beanies that fit everything from baby dolls to adults. For a couple of extra dollars, you can pick up a flower loom to make fun embellishments for your projects. (I love excuses for glitter, pom-poms, and flowers over here.)

This Colorful Knit Cap literally uses one type of stitch for the entire pattern but by changing up the yarn, adding cute embellishments, or switching between the knit and purl side of the stitches, you can create lots of different looks.

So grab your round looms and check out the video. I will walk you through making your first cap in no time. Then you can make tons of them and give them to everyone you know.

The first few caps will take a little time as you master working with a loom. But now it takes me about 2 hours to make a hat from beginning to end. I find it super relaxing to work with a pattern I know by heart. It clears my head when my hands are busy. And there are lots of worthy causes that take donations of knit caps – check out your local hospital NICU or Cancer Center. 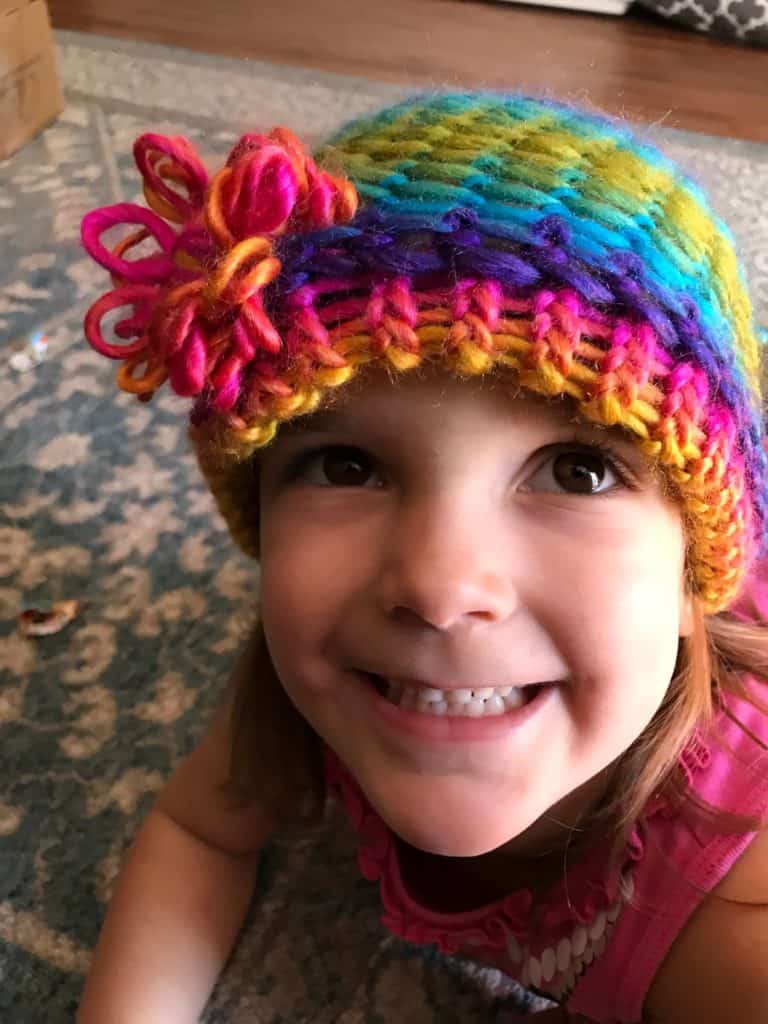 A Note About Loom Sizes:

A set of round looms will generally include 4 sizes — small (21 pegs) medium (31 pegs) large (36 pegs) and extra large (41 pegs). Generally kids over the age of 1 or 2 all the way up to adults will use the large, 36 peg loom for hats. The small will work for doll hats, socks, even gloves. The medium will fit a premise or newborn up to about a year old. The extra large fits those of us with extra large noggins – it also is a fun size for the slouchy style adult hat.

When you are using a loom, the general rule of thumb is 4 knit rows will be about an inch. (Give or take a little depending on the yarn you select. So if you want the hat to be 8 inches tall (which is a good size for an adult hat), you can multiply 8 (inches of hat) times 4 (rows per inch) and know you will need an estimated 32 knitted rows tall for the hat to be the size you need.

This knit hat pattern has a brim. When you create a brim, you will learn to knit rows double the length of the brim you desire, double it back on the loom (that will half your current row count). Then start knitting again to close the brim and start building your hat length again. (Don’t worry, I will show you how!) 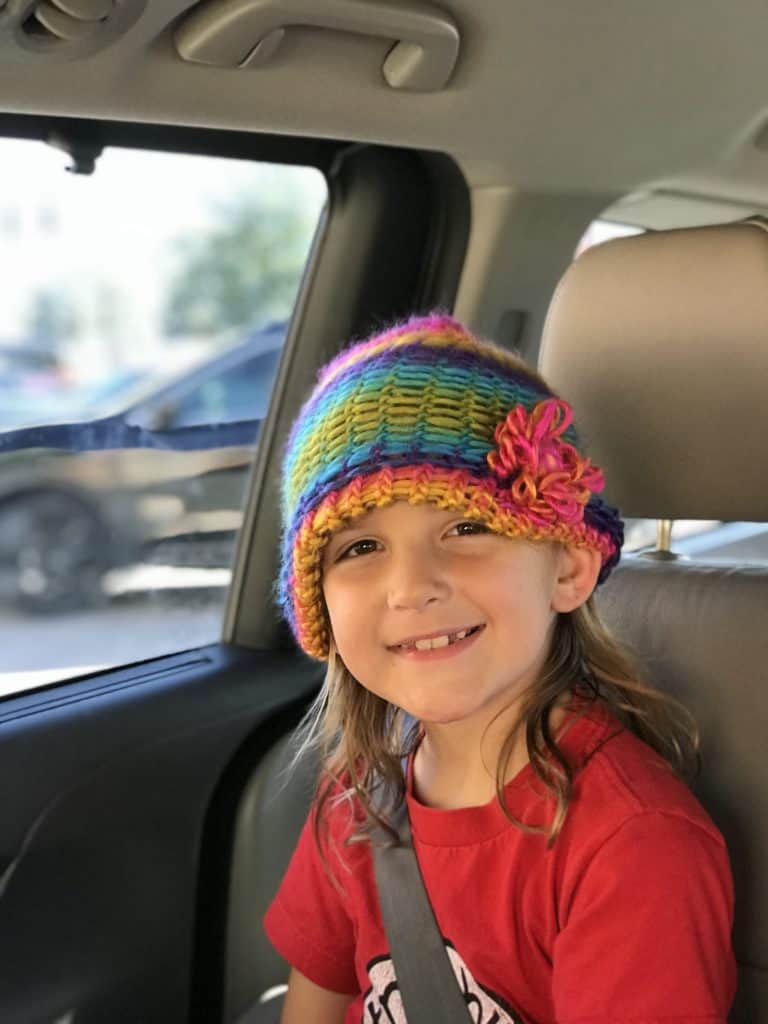 One skein of bulky, colorful variegated yarn (this is the one I used) or 2 skeins of soft worsted weight yarn.

1 round knitting loom (You can purchase in a set for under $20 – this pattern uses the large 36 peg loom.)

1 loom  pick (should come with your loom)

Tapestry needle for closing the hat and weaving in ends.

Making a flower on a flower loom