Home » Family » Our House Rules for Kids and Electronics 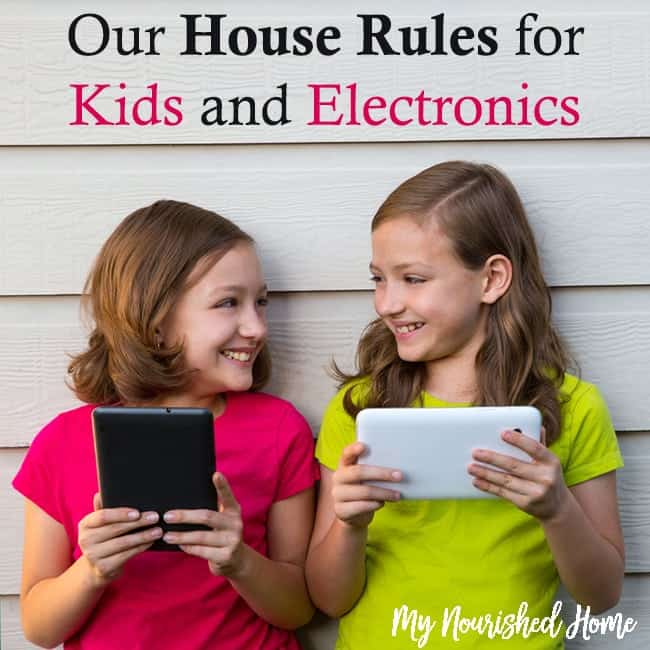 There was a time that my husband and I flew by the seat of our pants when it came to house rules for kids and electronics. But we didn’t like some of the content making its way into our home, the results we were seeing in our kid’s attitudes, or the level of risk we felt our kids were being exposed to – from people with outright bad intentions to other kids who were just not very nice to each other.

I have three daughters. One is 17. The others are 4 and 6 years old. In the time span between their ages, expectations for children and technology have changed so much. When my 17-year-old was born I never considered that she would be carrying a cell phone with her all the time, much less one that acts like a computer in her pocket. (I’m over 40 so I remember when we weren’t allowed to bring a calculator into math class!) Now my younger kids are entering elementary school and I am having to teach them to use a mouse because they are so used to touchscreen technology.

There is an upside to all this technology. I feel confident that I can reach my kids if I need them. I can ask them to check in regularly (especially when the teenager is getting in a car!) And there is an endless supply of education, entertainment, and connection at their fingertips to feed their healthy curiosity. It is also slightly terrifying, as a mother, that it brings the world to the doorstep of my children, who are at different stages of being prepared for it.

Our House Rules for Kids and Electronics

We came up with a list of our house rules for kids and electronics because we wanted our kids to learn to balance their experiences with all the technology at their fingertips with the values we feel are important.

We also decided we were totally okay being the mean parents on the block in order to keep our kids safe and healthy – physically and mentally.

My husband and I are both professionals, we know the value of technology and that it is an integral part of our kid’s futures. We certainly didn’t want to ban the use of computers, tablets, and phones. But we wanted to teach our kids to balance screen time against the importance of spending time with real people, in real places, doing real things. These house rules for electronics create expectations for behavior in our home and helps to keep our kids safe from people who may not have the best intentions.

All of these rules are based on the belief that as parents, we have to be involved in what our kids do every day. In the same way that I expect to know what’s happening in my home or in their class at school, I also expect to understand what’s happening on their cell phones and their tablets. But let’s be honest, without firm guidelines about how kids are allowed to use their electronics, accountability can be a really hard thing to enforce!

Here are our five rules for electronics in our home: 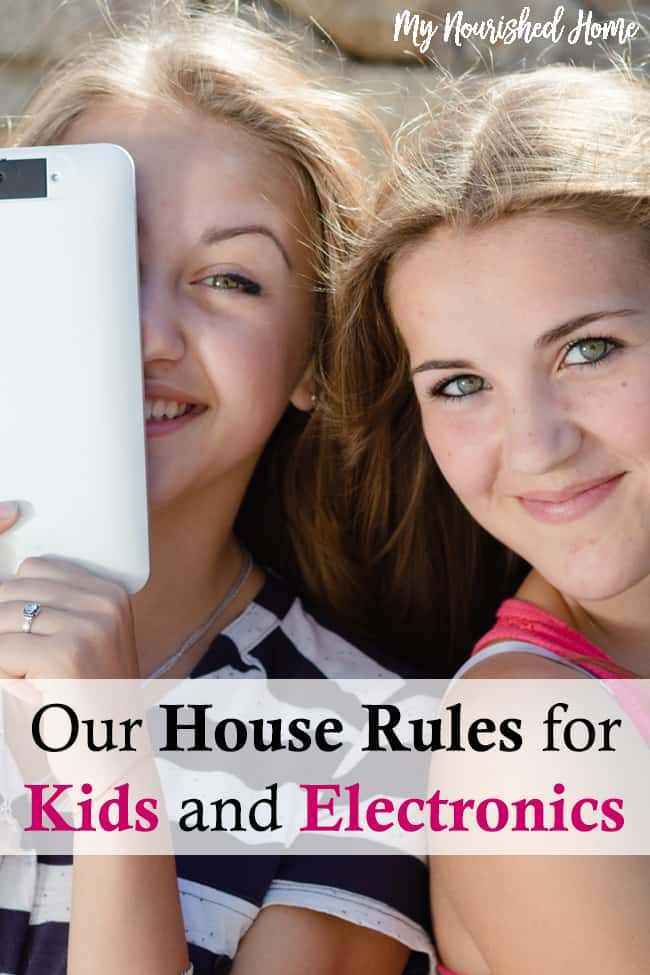 You may not have your electronics in your room overnight.

For our little kids, that means you’re not taking your tablets into your room at night and playing games when you should be in bed. It also means you are being monitored when you are online. It also means we can tell you to put your tablet away because spending time with the family is more important.

Our teenager is allowed to talk on the phone in her room as long as the phone comes out of her room and gets charged in the living room overnight. Any video chats require an open door. If we ever find that our kids have had their electronics in their rooms overnight, they lose access to their devices for whatever period we feel is appropriate.

There is no technology at the dinner table.

My husband and I follow this rule, too. In fact, we were probably the worst offenders. It’s not easy to get the five of us sitting around the table – so dinner time is sacred. We sit together and talk while we have dinner – we even bust out the board games after dinner. It was not easy to get in the habit of actually talking (I know that sounds so weird!) much less playing board games together. But the first step to making this part of our family life was banning phones at the table and turning off the television.

It really wasn’t until our teenager was much, much older than most of her peers that we allowed her to have a phone with full internet access. She earned that right over time by acting responsibly with the technology that she did have. We wanted her to be able to call her friends, send text messages, and take pictures – normal teenager stuff – but we didn’t necessarily see the point in having unlimited Internet access from a telephone when she was in school and expected to be studying. (There was always access to a computer at home and at school for studying.)

We were also leery of having an expensive phone in a bookbag that was going to be tossed around and crushed under books. However, she took great care of an inexpensive phone for a long time before it literally died of old age. So she earned the right to pick a new phone.

With our little kids, we don’t allow them to have unsupervised Internet access at all. They’re much too young. Any programs or apps they have access to are always monitored. We supervise what gets downloaded, what gets played, and for how long. They’re just too young and not able to see the danger. 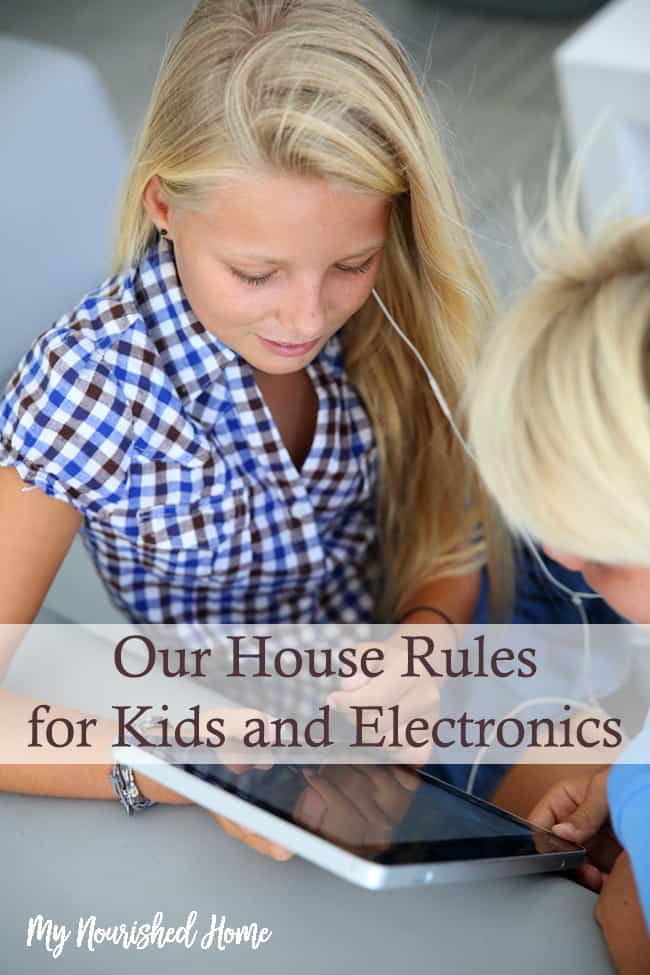 We have all your passwords.

I asked my teenage daughter for permission to share a story with you. When she was about 13 years old, in the midst of her young teenage angst, she got deeply upset about what she perceived was a violation of her privacy that we required all of their passwords. She said, “When will I be old enough that you allow me to have some privacy!!?” (She had plenty of personal privacy but we didn’t allow it with electronics.)

My answer was, “As long as you live here… never. As much as I want to be your friend, I am your mom first and it is my job is to keep you safe.” We had a long talk that day, and I explained to her that I was not interested in reading every email she sent. I wanted to know she was communicating with people we knew, that they were age-appropriate conversations, and that no one was being exploited or bullied.

She had a follow-up conversation with my mom, her grandmother, that she only told me about years later. She told my mom that she thought she deserved privacy. My mom told her that mom’s who care get in your business even when you don’t want them there. When my teenager told me about this conversation much later, she said: “Mom, I get it now. I didn’t understand then but I do now.”

She’s had plenty of experiences with friends where people were mean online. She has had teenage girlfriends solicited by men they don’t know because they liked their profile pictures. And friends who were ostracized because people will say terrible things behind a keyboard that they would never say to someone’s face.

Now, she’s so thankful that we kept her away from that environment – that we didn’t allow that negative online bullying or nasty, negative feedback to be a regular part of her life.

Parents own the electronics.

Parents own all the electronics at our house. They are on loan to the kids. We treat their devices as a privilege to be earned. They are not a right. (You’re not entitled to have an iPhone because your friends have one. You are not entitled to say things to people online that you wouldn’t say to their faces.)

Our children are allowed to have what they can responsibly maintain and treat with responsibility and respect. If they don’t take care of their electronics or break the rules – then the loan is called in and the electronics are returned to us as parents.

What are your thoughts about kids and electronics? What rules do you have? Are they difficult to enforce?

Tell me about your House Rules for Kids in the comments!